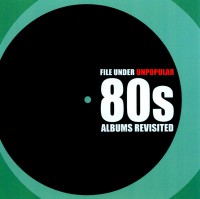 We all have them don’t we? The albums we brought off the back of one great single or on a whim but as soon as we got them home and pressed play couldn’t figure out why we’d bothered? They were the records, cassettes and CD’s set aside for another day, except that day never came so they slipped to the bottom of the pile, quietly forgotten. Cleaning out my garage recently, desperate for more space to store even more shite, I came across a hoard of long gone albums erased from my memory. Perhaps the time had come to give them that one last chance; the one they’d been denied all those years ago.

FROM BRUSSELS WITH LOVE (November 1980)

An arty as fuck cassette compilation from Factory Records wannabes Les Disque Du Crepuscule, From Brussels With Love woke me up to the possibilities of art in music and that such intelligent dilettantism might just be a way out of the après-punk malaise. Entrenched as I was in early 80’s cassette culture, such an aesthetically pleasing object was something to aspire to, so much so that I virtually ignored the music. Very much a snapshot of its time; a Brian Eno interview alongside tracks like John Foxx’s synth sketches, Thomas Dolby’s poignant ‘Airwaves’ and a Richard Jobson poem, over 30 years later its still not a particularly easy listen. Then again, it was never meant to be.

To my ears few records were ever going to surpass The Slits Cut, not even the new album by The Slits themselves. So I never had any intention of giving Return of the Giant Slits a fair listen. Carrying a far more experimental vibe, the albums broader, tribal primitivism and pioneering world beat were not easy to love, especially as the shadow of Cut refused to fade. Now I can consider Return of the Giant Slits on its own merits it sounds far better, songs like ‘Earthbeat’ almost hitting the heights of its illustrious predecessor. Sure, there are some moments of aimless noodling, but even then there’s Ari Up’s magnificent, childlike sing song to pull you back in. God how I love these women.

By the time You Can’t Hide Your Love Forever came out in February 1982, cutesy soul boys Haircut 100 had already stolen Orange Juices’ thunder with their own highly polished version of Postcards jingle jangle funk. While we knew damn well that Edwyn & Co were the genuine article, the casual pop kid saw just another pop funk group who didn’t sound anywhere near as good as the serious muso version they already had. As for me, I was bored with it all; the cheesy 80’s horns, the disco drums , the fake soul backing vocals, yet I bought it anyway. What I failed to grasp was that You Can’t Hide Your Love Forever was a happy rejection of all that crap and nowhere is that more obvious than on the version of Al Green’s ‘L.O.V.E. Love’ where, doomed to fail in any comparison with the righteous Reverend, Edwyn Collins go’s for it anyway and ends up being so sincere and loveable I can’t help but smile.

With a name, album and songs inspired by Arthur Janov’s Primal Scream Therapy, Tears For Fears were never going to be a bundle of laughs but in 1983 that suited me just fine. Despite being pigeonholed with new popster’s like the Duranies, The Hurting’s darker, far more intelligent edge connected in a way Simon Le Bon never could. Chronicling the pain, hurt and hope surrounding the transition from childhood to adulthood, songs like ‘Suffer The Children’, ‘Mad World’ and ‘Pale Shelter’ demanded my attention for a couple of months. Hearing them again resurrects forgotten memories of an earlier angst ridden age of ridiculous seriousness and wonderful innocence while reminding me what brilliant tunes they were in the first place.

Jerry Dammers was never one for taking the easy path. As if More Specials wasn’t a big enough departure from the ska by numbers of their debut, he reconvened four years later as the Special AKA for In The Studio. With what I can only assume was a deliberately dull cover, greater musicianly values and grown up songs, it went so beyond my taste at the time that I must surely have borrowed it or found it in a bargain bin. Needless to say, Dammers was way ahead of the crowd because nowadays all those bohemian lounge, afro-beat and jazz styling’s sound remarkably modern, if a little contrived.

FAVOURITE TRACK ‘Dream Within A Dream’

In December 1980 I was right there with Paul Morley when he called for an ‘overground brightness’ of New Pop to ‘bring life back to the radio’ and ‘make the single count’. I always heard Frankie as the natural conclusion to all that and with Morley’s subversive concepts at their core, records like Who’s Afraid Of The Art Of Noise, Welcome To The Pleasure Dome, A Secret Wish and Slave To The Rhythm were certainly intriguing. Without his influence would Propaganda really have kicked off A Secret Wish with an Edgar Allan Poe poem? Ultimately, in the face of hip hop, I rejected ZTT as another con, necessary victims of my populist backlash. In fact, I forgot all about Propaganda until I heard the fabulous ‘Duel’ washing over the airwaves recently. Somehow, listening to A Secret Wish again seemed a good thing to do and I’m glad I did. ZTT never did get to rule the pop world, but intellectual, grandiose masterpieces like this make me wonder whether 21st Century pop would be a better place if it had.

Talk Talk never tried to rule the pop world. Unlike Paul Morley, Mark Hollis wasn’t interested in such pretensions. Thankfully, The Colour Of Spring was made when Talk Talk were teetering on the edge of reinvention, yet to become the serious album artists so beloved of critics. As was often the case, I would have got this purely for the singles, only too happy to ignore the remaining six tracks after the obligatory one play chance to impress. ‘Life’s What You Make It’ and ‘Living In Another World’ still sound fantastic but amongst what I’d always assumed was mere filler are some great tracks like ‘I Don’t Believe In You’ and ‘Chameleon Day’ while ‘Time It’s Time’ is even better; eight and a half minutes of magnificent, 80’s opulence that maybe the best thing Mark Hollis ever did.

In my mid-twenties I was curiously attracted to acquiring records of melancholic misery and then ignoring them. David Sylvian, a man known to a select few as ‘The Genius In The Shadows’, was certainly the most haunted of them all, his world weary voice never failing to lament a seemingly dismal life. Quite who’s life he meant was never clear but much like myself, letting the happiness in was something he clearly struggled with. No matter though because Secrets Of The Beehive remains a work of such unique quality, and in ‘Orpheus’ contains a song of such beauty, that the overbearing sadness becomes strangely bearable.

FAVOURITE TRACK ‘I Want A Dog’

In 1988 post punks energy had long evaporated and yet I was still mistrustful of dance music. The Pet Shop Boys singles helped change my mind but in 1988 I still wasn’t quite ready for such a disco pop behemoth as Introspective. I know now that most of their inspiration came from years of fabulous, wide screen dance mixes and somehow, they knew instinctively that house would soon be everywhere, not only the basis of all great dance music but the basis of great pop too. More than that, as the title suggests, Introspective was about being alone and finding a place as far away as possible from the madness of this world. In 2014, I’m more appreciative of those sentiments than ever before.

Seething with political rage, Matt Johnson’s Infected was an album so in tune with the times it should have been force fed to each and every one of Thatcher’s bastard children.

I lived with it, loved it but with Johnny Marr’s guitar adding far more subtlety, Mind Bomb failed to smack me round the face in quite the same way. What’s interesting after all this time is how it manages to fuse Johnson’s disgust at 80’s politics with the healing power of love, an unusual yet intriguing mix if ever there was one. What’s more, in light of 9/11, the Arab Spring and the rise of the Islamic State, a song like ‘Armageddon Days (Are Here Again)’ was pure prophecy.