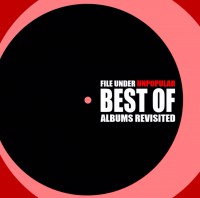 Conventional wisdom says that Best Of’s and Greatest Hits albums are for teenage girls, middle-aged losers and casual listeners whose idea of a record store is their local branch of Tesco’s. It’s a sentiment made clear by music snobs all the time; only a fool would admit to loving an artist’s Best Of more than the individual albums.

Of course, these days we can all knock up a killer Best Of playlist in less time than it takes to play one song, that is if Spotify haven’t already beaten us to it. And yet, long before downloads, streaming and the sad, death rattle of the album, Best Of or Greatest Hits albums were the only cost effective and time efficient way to get to know an artist’s finest work in one go.  Admittedly, they can be a disaster, screwed up by rights issues or lazy compiling her, but done properly they can preserve the very essence of an artist.

When cash was tight, Best Of’s and Greatest Hits were my only option and over the years I’ve bought more than my fair share, usually by artists who have passed me by for whatever reason. Here’s some of the more interesting ones, all offering a slightly different twist on what can make them so satisfying.

THE DOORS / WEIRD SCENES INSIDE THE GOLDMINE (January 1972)

Imagine if you will a fairly innocent just turned 13 year old suddenly discovering a dog eared, second hand copy of Weird Scenes Inside The Goldmine and hearing Jim Morrison holler ‘Break on through to the other side’ for the first time. Perhaps, you can understand why there was no coming back for me after that. Jim Morrison watered the seed of reactionary fervor planted by Bowie not six months before, but more than anything, more than Bowie or any author or poet, he gave me the desire to write. I read out the words to ‘The End’ before playing it to my bemused English class, Morrison’s poetic ambition and the The Doors heart of darkness as awe inspiring then as it is now. If there’s one Best Of that could be said to have changed my life, Weird Scenes Inside The Goldmine has got to be it.

In my first years of musical enlightenment, every record I bought pulled me ever deeper into the other worldly web of pop. This T.Rex Best Of was a budget Music For Pleasure LP discovered in the rack at my local newsagent, yet it was just as precious as any full price album. Cherry picked from Marc Bolan’s hippy years as Tyrannosaurus Rex and cheekily marketed to cash in on his chart success, the fantastic purple cover and lurid, pink lettering reflected the strange magic within. From the monumental, seductive pop of ‘Ride A White Swan’ and ‘Debora’ to the frankly bizarre ‘Strange Orchestras’, it perpetuate a simplistic kind of cosmic escapism that despite the Narnia-ish gobbledygook, is just as enchanting as Bolan’s better known works. After all this time, it remains a delightful, exotic treasure.

My teenage obsession with The Stones began with Sticky Fingers and ended in 1976 with Black And Blue. I knew nothing of their past and didn’t want to. The sixties was not my time and I had no interest in it until Rolled Gold became the must have present of Christmas 1975. To think I had never heard the likes of ‘Not Fade Away’, ‘Little Red Rooster’ or ’19th Nervous Breakdown’ before sounds ludicrous now but it revealed a different kind of Stones, documenting their transition from raw rhythm and blues copyists to the masters of malevolence, from Uncle Chucks ‘Come On’ to ‘Gimme Shelter’ in 28 songs and a little over six years. To this day Rolled Gold is the only Stones Best Of I own, another reminder of how good they once were.

A James Brown compilation at the height of punk wasn’t an obvious purchase but made a welcome change to my usual diet of ramalama, white boy vitriol. Contrary to popular belief, punks went to disco’s too, at least they did when they could find a doorman who didn’t object to their lack of flares, moustaches and footballer perms. ‘Sex Machine’ and ‘Get Up Offa That Thing’ were regular favourites, guaranteed to have us shaking our stuff in the darkest corners of the dancefloor, but them apart, I knew nothing of James Brown’s long, influential career. 30 Golden Hits filled me in with every American hit from 1959 to 1976, a stack of supremely funky grooves that within a couple of years would have new life breathed into them when punk turned to post punk and hip hop emerged from the New York projects.

A wide range of artists have covered, sampled or been influenced by Siouxsie And The Banshees, yet I’ve always struggled to find any substance beneath the surface mystery of their records. Live they were a real force but the music always played an incidental role, overshadowed by Siouxsie’s mesmerising presence. When they released the shimmering, insanely catchy, sex pop singles ‘Happy House’ and ‘Christine’, not only did it turn my head, I resurrected their early, punkier singles such as ‘Hong Kong Garden’, ‘The Staircase (Mystery)’ and ‘Playground Twist’ to listen anew. And when they were all lined up together on Once Upon A Time, suddenly The Banshees seemed to make a lot more sense. A rare case of a Best Of succeeding where the regular albums failed.

Occasionally a group can get a little too dismal even for me, The Cure being an obvious case. I gave up on them after ‘A Forest’ and the icy angst of Seventeen Seconds. Then, just like The Banshees, something remarkable happened and Robert Smith started to write pop singles, and not just any old pop singles either. His irresistible, upbeat, easily digestible songs were more than a little kooky, but they transformed The Cure into a radically different proposition, completely at odds with their grim albums. Alongside the spiky new wave of ‘Killing An Arab’, ‘Boys Don’t Cry’ and ‘Jumping Someone Else’s Train’ they all feature on Standing On A Beach; ‘Let’s Go To Bed’, ‘The Walk’, ‘The Love Cats’, ‘The Caterpillar’, ‘Close To Me’ and best of all ‘Inbetween Days’. What’s not to love about that lot?

One of the most enlightening things about Best Of’s is the complete change of mood a group like Madness can provide. Their kind, friendly pop always came as a welcome distraction to my more regular selections. Of course, they did make some fairly decent albums in their time but a singles compilation was really where Madness were at. Across the decades there’s been plenty of them, but in 1986 Ultimate Madness did it for me, cataloging their subtle move from the nutty, circus knees up of ‘Our House’ and ‘Driving In My Car’ to the surprisingly depressing ‘Yesterdays Men’ and underrated ‘(Waiting For The) Ghost Train’ and ‘One Better Day’. The perfect soundtrack for a sad, derelict, end of the pier Britain, they confirmed what I had always suspected; Sugg’s gleeful grin had been a sarcastic grimace all along.

I could never get my head around the uncritical, holy adoration New Order enjoyed off the back of Joy Division and the death of Ian Curtis. I could only think of them as the three nobodies he left behind so dismissed them as tedious and repetitive, barely bothering to listen. It was only when ‘True Faith’ and Substance 1987 appeared that I began to appreciate how it didn’t matter about the dumbarse lyrics or Bernard Sumner’s weedy voice, because New Order’s indie dance was the best proof there was that music could be anything you wanted it to be, even if you were the remnants of a doom laden, white, Northern England, post punk group with no obvious dancefloor pedigree.

God bless him, in 1976 I elected John Lydon as my own personal Jesus when he gave me the life changing gift of self-belief and hope in some seriously restrictive times. As far as I was concerned he walked on water, not that I ever expected him to change the world for my benefit or die trying. I even forgave him when he started saluting the flag and jerking off the corporation’s for fun and profit just like the rest of us. Having lost touch with his PiL exploits, I was keen to catch up and Greatest Hits So Far seemed like the cheapest and easiest way to do it. And in many ways it was, laying bare the brilliant, the bad and the fucking awful sides of Jesus John for all to hear; from his necessary, shapeshifting exorcism of Trad Rock to the big hits and inevitable slide into horrible, dollar grabbing, sub stadium rock. In truth, it does drop off alarmingly after ‘Rise’, but at least it reintroduced me to ‘Flowers Of Romance’, the strangest chart single of the last 35 years, maybe ever.

My discarded cassette copy of the Chili Pepper’s best tunes prior to Blood, Sugar, Sex, Magik set my 10 year old eldest son on his own voyage of musical discovery so will always have its own very special place on my iPod. Yet beyond all the sentimental guff, there does lie an extraordinarily good Best Of. Selecting the finest moments from their first five albums, What Hits is definitely not be for the faint hearted or the Chili Pepper’s more recent disciples, but jam packed with the most energetic, raucous, white boy funk rock ever, it is still the only way to be educated in the Hillel Slovak, pre John Frusciante days, when the Chili Peppers were an entirely different, far less commercial, proposition.