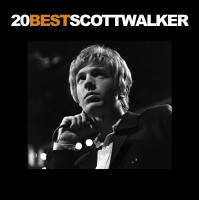 01. You’re All Around Me (The Walker Brothers Single B Side November 1965)

02. The Sun Ain’t Gonna Shine Anymore (The Walker Brothers Single A Side February 1966)

04. Deadlier Than The Male (The Walker Brothers Single A Side December 1966)

I know we’re all getting older but 2019 is already turning out to be one hell of a year for dead pop stars. Here at Green Inc we’re beginning to think that penning tributes to the great and the good, the old and the young, is fast becoming a fulltime occupation. And yet following hard on the heels of Pete Shelley, Mark Hollis and Keith Flint, this one feels different. Maybe it’s because as a true artist (and how many musicians can we say that about), Scott Walker was so intent on pushing the envelope of what was possible and/or listenable that he remained virtually unknown to all but the most discerning music fan. Or more likely is that like Leonard Cohen before him, being of a certain age his death has come as less of a shock.

Starting out in sixties Los Angeles as the definitive pop pin up with John Maus and Gary Leeds as the unrelated Walker Brothers, by decades end his quartet of iconic solo LP’s Scott 1, Scott 2, Scott 3 and the self-penned Scott 4 had become less and less pop compliant and more and more croon heavy. Feeling a bit like Donny Osmond morphing into the avant-garde composer John Cage, Scott Walker had successfully reinvented himself as a serious, self-made, self-governed pop auteur but commercially he was a total disaster, so much so that by the mid-seventies his dire financial predicament pushed him into reconvening The Walker Brothers cash cow.

I vaguely recall their top ten hit ‘No Regrets’ but apart from that I remained unaware of the why’s and wherefores of Scott Walker until an NME review of Julian Cope’s 1981 deleted-on-release compilation Fire Escape In The Sky inspired me to track down the original Scott LP’s in Sirrell’s, Reading’s one and only second hand record shop. Grandiose, European and mysterious they were records of such rare beauty that even now I find it impossible to write about them in a way that doesn’t sound stupidly gushing.

The albums that followed were more difficult affairs, albeit intentionally so, and merely succeeded in pissing off Scott’s coterie of dedicated fans who didn’t quite know what to make of the creepy synth drones, the industrial opera, the hostile string sections, the slapping of meat and the bashing of bricks on metal. Intense and exhausting sonic art of the highest order, they were also ridiculously pretentious and verging dangerously on the unlistenable.

As a matter of fact I clearly remember feeling disgruntled when I heard Climate Of Hunter for the first time in 1984, a record I’d bought in the vain hope that it might be a continuation of the magnificent solo albums. But with its icy production, lack of melody and opaque lyrics it sounded almost willfully impenetrable and anonymous, and of course in hindsight can be viewed as the start of his long, lonely journey into dissonance and the unknown. The resonant voice of mystery and loss, more than anyone Scott Walker proved that the passage of time and creative potency need not be mutually exclusive; his oeuvre, as 1995’s ‘Farmer In The City’ reflected, ‘the journey of a life’!

Over the last three decades I looked on in fascination as Scott Walker became the classic example of a cult legend, and how that unwanted status grew like a weed, strangling and obscuring him more and more with each passing year until he all but vanished from view. In the short time since his death I’ve been hearing how that’s what he was trying to do throughout his entire career; eternally pushing the boundaries in a vain attempt to escape the torture of celebrity and disappear entirely. Ironically, now that he really has disappeared he’s going to be seen and heard more than ever before, but at least he won’t be around to witness it.