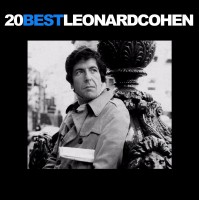 I borrowed the first Leonard Cohen record I ever heard. It was 1978 and I was with a girlfriend visiting her sister who lived in a grotty, bohemian bedsit in the seedier part of town. Fired up by the emerging punk diaspora, Leonard Cohen’s folky, self-confessional songs were the furthest thing from my mind. But being open minded, when the sister thrust her battered copy of The Best Of Leonard Cohen into my hands and said ‘You need to listen to this’, I took it home and gave it a whirl.

It’s fair to say that as soon as ‘Suzanne’ kicked in, closely followed by ‘Sisters Of Mercy’, ‘So Long, Marianne’ and ‘Bird On The Wire’ I was transfixed, their gentle beauty unsettling my emotions in a way I would never have believed possible if I hadn’t felt it myself. In fact, so different were they to my more regular diet of PiL, Gang Of Four, The Fall, Magazine and the like that I never gave the album back. But unlike my other contemporary records, Leonard Cohen’s remained in its sleeve. It just never felt like the right time to play it until eventually it slipped from my memory.

That is until 1994 and Jeff Buckley’s remarkable re-make of ‘Hallelujah’, a song that had taken Cohen five years to write yet was so unique it warranted its own book. I can still remember thinking ‘Oh Leonard Cohen, I wonder what happened to him?’ Of course, my permanently borrowed Best Of was long gone but undeterred, I started digging around in the bargain bins of my local second hand shop and came up with his trio of eighties and nineties albums. More sonically in tune with my listening habits than the acoustic majesty of his early albums, the songs were so intense and profound as to be almost biblical. But then, Leonard Cohen always did cut deeper and darker than the rest.

Yet while I loved his blackened tales and his portrayal as Nick Cave’s devilishly debonair Uncle, I realised that in truth, I admired his albums a lot more than I played them because it was only a matter of months before he’d disappeared off my radar again. In fact, I only rediscovered him for the second time last month when, in what must surely have been an act of karmic intervention, his final album provided the perfect soundtrack for my first ever trip to New York.

His death soon after my return didn’t come as any great surprise, not to me and I suspect least of all to him. You Want It Darker’s title track and songs such as ‘If I Didn’t Have Your Love’ were littered with clues. Leonard Cohen had clearly come to terms with his own impending departure. Then again, hadn’t he been dealing with his own mortality in finite detail from the moment he first put pen to paper?

What did surprise me was the reaction to his demise from those around me. Naturally there was no international outpouring of grief as there had been for Bowie, no interruption of my local Radio DUMB FM’s daytime playlist to slot in ‘Suzanne’ or ‘Tower Of Song’, but there were enough quiet words of reflection from the likes of my teenage daughter (who only knew of him via John Cale’s version of the ubiquitous ‘Hallelujah’ in Shrek) and my 80 year old mother in law (who claimed to be au fait with his early sixties poetry) to understand how Leonard Cohen’s words and music had touched all manner of folk, just as they had touched me.

After a year that has seen the loss of so many mavericks and poets, artists whose careers were built on risk and craft as opposed to social media counts and dumbarse rhymes about status and accomplishment, the death of Leonard Cohen is another reminder of how time moves on regardless. While it's been said many times before, we really won't be seeing the likes of him again anytime soon. And so, whether it’s to mark the departure of an old friend or a new discovery, get to grips with our new, slightly scary, political age or just to reflect on life, now’s the time to savour what Leonard Cohen left us.