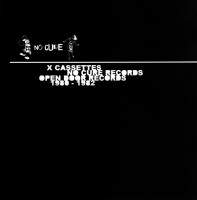 I had always daydreamed of a career in pop music without ever really knowing what I was dreaming about or having the foggiest notion of how to achieve it. I had been involved in punk from its earliest days, living it, doing it with the fuzz driven Kaotix and the noisesome and loathsome Jesus Fucks before ditching all guitars for a cheap catalogue synth and a double cassette recorder, the size of a suitcase. In the late 70’s, on the outer fringes of the DIY universe, I became an active participant in the cassette underground, recording short soundscapes for avant-garde tape labels while forging connections with the likes of a pre fame Mike Scott and Kif Kif Le Batter of Fuck Off Records. So as a first step I started my own cassette label, X Cassettes.

Cassette culture had proliferated like rampant weeds when musicians and non musicians alike realised they didn’t even need a record to unleash their efforts to the world. While most of the releases consisted of characterless group demo’s or experimental scrapings (much like my own), I was determined to deliver as much quality and creativity as possible.

Due to the close proximity of London I had ignored Reading during the punk years but as I began to search for potential releases I found it bereft of any kind of scene or action with just a few old lags and ‘local legends’ sticking to their own impenetrable cliques. With increased resolve and the help of new compadre Richard Griffin of No Cure fanzine, I widened the search and unearthed some hitherto unknown hot spots of activity in the surrounding suburbs and villages, hooking up with two very different post punk groups.

Dig Dig Dig, with future Transvision Vamp and Bush bassist Dave Parsons in their ranks, were all leather jackets and slashing Gang Of Four guitar, dance music for those who couldn’t and didn’t want to dance while The Stills were all jumble sale suits and Joy Division atmospherics. Dig Dig Dig became an important mainstay of those early learning years yet no matter how much they tried they found it impossible to break free of their home town mentality. The Stills however were different.

A few years younger, more charismatic and far more volatile, they were fresh out of school and a little uncertain as to their next step. I offered them my slightly older, slightly wiser guiding hand while we set about releasing a Dig Dig Dig single on No Cure, a record funded by 800 show starved teens packing into Drayton Labour Club on the outer limits of downtown Abingdon. While the single was a great document, as was the second No Cure release by teenage punky popsters Quality Drivel four months later, the label was never going to be a long term prospect and neither was Open Door, our next not so great mistake.

Through sheer, bloody minded persistence I had secured a useful manufacturing and distribution deal with Illuminated Records to release a compilation LP of Reading groups. Both The Stills and Dig Dig Dig contributed as did The Ballistics, a Clash style reggae group we would meet again some four years down the line, but overall the record was a real disappointment, stuffed with amateur no hopers and smug local zeros just like all those other compilations documenting similar local scenes across the land. Beyond The River was no different and no better, apart that is from The Stills who were by far the best thing on it. I thought them so far ahead of the pack they couldn’t possibly fail but with our joint inexperience, a dull 12 inch EP and internal fisticuffs they barely got off the ground.

In hindsight, I spent far too much time and energy trying to generate local interest which, even if it had all come off, would have been of no value whatsoever. Numerous hours were wasted chasing the local media or persuading pubs, clubs, art spaces and council theatres to put on gigs. One person who repeatedly made hollow promises with much fanfare was Goring based producer Martin Rushent. At one point he even offered to produce The Stills at Genetic for free but like everything else he ever said, it never did happen.

The one highlight of the whole period was a headline show at Readings Hexagon Theatre, a night remembered for Sam Brown and meeting Pete De Freitas of The Bunnymen. But that high was offset by numerous lows at poorly attended London gigs in pubs like The Moonlight, The Fulham Greyhound, The Clarendon or The Rock Garden. Piss stinking shitholes the lot of them.

I was determined to find a better way.

DIG DIG DIG / Invizibilitze / From ‘Anything Could Happen’ Cassette

X Cassettes was the only time I ever had complete control over any music biz adventure. Every release was handmade from start to finish, hour after hour copying on a double cassette recorder, constructing photocopied covers and sticking on labels. In the end, as each release outsold its predecessor it grew to ridiculous proportions, the final compilation Bits selling almost 500. That was more than a fair few Criminal Damage releases.

Dig Dig Dig recordings have aged remarkably well. Even though they got precisely nowhere they were one of the finest groups I ever worked with. Those happy go lucky youthful days were fantastic. We didn’t have a clue what we were doing but didn’t care, we were involved simply because we loved it, travelling miles to all those out of the way backwoods village gigs because we wanted to. And it didn’t matter if no-one else was there because we were.

In 1981 Between Pictures were the ‘big’ Reading group. Their lightweight reggae, new wave thing was fairly typical of many a local group at the time. What made them so different was singer Alison Rolls. All the boys loved Alison. A couple of years later, renamed Friction Groove and with ex Stiff Little Finger Ali Mcmordie on bass, they made an album for Elektra before finally imploding.

Quality Drivel were 16 year old schoolboys from Abingdon public school. At the time most of Radiohead were in the second year. Never anything more than spiky haired popsters they had an enormous following around Abingdon and Oxford. It had been largely their fans packing out Drayton Labour Club that had made No Cure Records possible in the first place.

A1 VEGETABLES / It’s All In The Past

From ‘Beyond The River’ LP

Beyond The River still pisses me off. We had a brilliant opportunity and failed miserably because Reading never really had a scene in the first place, just a sprinkling of shambling old farts, smug ‘local legends’ and naïve innocents yet to play their first show.

The Stills were incredible live, an intense whirling celebration of what it meant to be young in the early 80’s, singer Jonny Wilkes awkward angular movements hiding his all too fragile, sensitive soul. There was no way Chorus Of Blows could ever match that and it didn’t, ‘Clinical’ just about the best of an average bunch. The surprise here is the Bunnymen influence. At the time I don’t remember it being quite so obvious.