prologue > criminal damage and all that > Satellite / Beat International 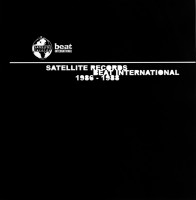 Hindsight is a truly wonderful thing and almost thirty years down the line it’s obvious that by the end of 1986 Criminal Damage had come to the end of its natural life. After all, four years was a long time for any Independent label to survive. And yet despite all the trials and tribulations I still had the bug and was not quite ready to drop out completely. While I needed to be involved in something, I was forced to accept that I would be unable to commit as much time as I once had. The answer, which had been staring me in the face all along, was Satellite Records.

In February 1986 I had set up the new label to release a Panther Burns EP that somehow hadn’t quite fitted into my vision for the second phase of Criminal Damage. Due to the high profile of Tav Falco and the impact of the two Raw Cuts compilations, I was still getting a mass of records and tapes from groups as far afield as Sweden, Germany, Spain, France, Italy, America and Australia.  All were a part of the garage punk revival or deeply in thrall to The Stooges and early seventies. It was all retro stuff and even though I had moved onto the futuristic realms of hip hop, house and techno, some of it was fantastic, pre-dating the not so dissimilar grunge era by a good couple of years.  So I resurrected Satellite solely as a low profile UK outlet requiring little or no contact with industry dickheads or media pariahs. It was what it was and with no extortionate recording costs was unlikely to lose vast sums of money I could ill afford. And that’s exactly how it worked out.

The one thing I never expected was the group’s manic fanaticism. Whether they were providing a couple of tunes for a new Raw Cuts or getting their own LP together, their zealous enthusiasm was overwhelming. No matter whether they were from Berlin, Adelaide, Malmo or Phoenix most of them made a point of coming to Reading where many a drunken night was had. I built up some long lasting friendships and had another great year or so. Life was good again and that’s where I should have left it. Instead, with my old enthusiasm fully restored I began to think on an altogether grander scale. Fatally, I had allowed myself to be suckered in again.

By chance, a meeting with an old acquaintance from the early post punk days led to a new joint venture, Beat International. Over the years Chris Broderick had built up his Reading studio into a hi-tech state of the art 24 track. Now he had a desire to start a label, mainly I suspect as a promotional tax loss thing. While I had plenty of misgivings about his motives, and knew damn well that his taste in music was shocking (Hall And Oates anyone!), I also knew it was a fantastic opportunity to set up a label with no upfront recording costs. And that was a bloody big carrot.

Obviously it was all too good to be true and predictably turned to shit straightaway. While I was busy talking to MB Hi-Power, The Heart Throbs, The Jack Rubies and Scatman PX and planning a Chud record for Satellite, Chris presented me with the Surfin’ Lungs as the first release. I was speechless. They were awful yet naively I still thought I could make it work and quickly got The Chud over from Berlin to record. But then within a couple of days Chris had kicked them out of the studio supposedly for unruly, drug stoked behavior. Strange, but I’d thought we were dealing with rock’n’rollers not grey suited, grey minded civil servants.

Needless to say I was gutted, but this time, unlike previous disappointments, I was just too tired to fight. Disillusioned and angry, I felt unable and unwilling to continue in such a ridiculous industry populated by such ignorant twats and pulled the plug on everything. I was surprised how relieved I felt. Clearly the time had been right to finally let it all go. After eight years of brilliant misadventures, 119 groups, 62 releases and far too many great mistakes, it had all come to a rather inglorious end. And that as they say was that!

Tav Falco was a bit of a ledge amongst European rock’n’rollers of a certain age. I had been corresponding regularly with him during 1985 when the opportunity came up to do a UK EP of recordings that had already been released elsewhere. As a fan I jumped at the chance, setting up Satellite initially as a one off label.

THE CHUD / Under The Green Sun

I listened to this record again recently and found the Nirvana Devils a nice surprise. Completely different to the more garage influenced contributors, ‘Some Foreign Shore’ sounds like British Indie pop of the time and as such stands up surprisingly well. Like the majority of the groups on this record, they were from Berlin, a city I have always found fascinating. Shamefully, despite The Chud asking me over loads of times, I never did get there.

With the series getting into its stride, Raw Cuts Volume Four was put together with Doug Thomas of Greasy Pop Records in Adelaide. Infact it wasn’t so much an Australian compilation as an Adelaide one. Both the Mad Turks and Liz Dealey were fairly well known, certainly in their homeland, but King Snake Roost, who definitely had that Membranes kill ugly pop quotient, were all new.

THE HIJACKERS / That’s My Baby

Volume Five was the follow up to Swedish Beat from the previous year. It was a lot more primitive than its predecessor, capturing younger, more inexperienced groups apart from genuine Swedish garage punks the Crimson Shadows. Strangely, they were the rawest of the lot, ‘Garbage Truck’ recorded on a poxy cassette recorder live in some poxy cellar. Authentic 60’s copyists? You betcha!

HIDDEN CHARMS / You And Me

THE SLAMMERS / Don’t Push Me Around

The rarest records we ever produced were these limited runs of 250 for promotional use only, a Raw Cuts track one side, an unreleased track on the other. All five were sent out as one package mainly to European magazines and radio.

THEE FOURGIVEN / The Reason Why

The legend that was Greg Shaw helped out with this. I always wondered how he managed to keep his enthusiasm up because he had it in bucketfuls, always delivering exactly what he promised right on cue. The Dwarves are probably the best known of these three though this was their first incarnation; vastly different and far better than the shock horror pussyholes they are today.

I’d stayed in touch with Sweden’s Preachers and Australia’s Bloodloss ever since they’d appeared on Raw Cuts. Both came over for a visit and with songs already recorded I offered them a UK outlet. Ironically both sold out of their one and only pressing of 1,000 due to European demand. Infact, 99% of all our records went out of the country. Even today it’s easier to find copies for sale in Spain, Italy and France than ol’ Blighty.

THE THANES / She’s A Robber

I felt a UK Volume of Raw Cuts was long overdue so with Lindsay Hutton’s help cast the net far and wide to uncover enough youngsters to fill an LP. Unfortunately, even though their yabba dabba exuberance was infectious, most were so new, so raw and so inexperienced the recordings weren’t great. Compared to the other volumes this was definitely the weakest of the lot, the one exception being Lenny Hesling’s Thanes who were groovy enough to grace any record. My cover drawing was also pretty cool if I say so myself.

From ‘The Biggest Wave’ LP Beat International Beat 1 May 1988

‘Girl Trouble’ was the best of a very bad bunch about woody’s, quarter mile machines, summer vacations and the suchlike. Why I ever agreed to getting involved with this still baffles me!

There was no way I could disappear leaving the Surfin’ Lungs as the very last thing I was involved in so here’s a couple of tracks from records I had in the pipeline. T. Tex Edwards was an unsung exhumer of country and rockabilly crazy cool crying out for a retrospective of his numerous recordings. We had an LP ready to go with tapes, artwork, everything. ‘Move It’ is from his time as Tex And The Saddletramps while The Chuds ‘Move’ was one of four tracks salvaged from the aborted May 88 studio sessions. I guess the rough mixes of those few days really were my swansong.