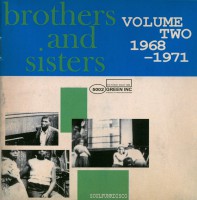 9 JOHNNY JOHNSON & THE BANDWAGON / Breakin’ Down The Walls Of Heartache /

The years 1968 to 1971 were a period of social and political upheaval, when the hippy love-in turned to grim reality. It was also the most fertile and inspirational time in soul history. Black consciousness continued to rise but as more radical Black Nationalism and Black Power. Visions of the ghetto became the overriding image of black America, albeit glamorised as a dark inversion of the American Dream.

Ultimately, this glorification would be a dead end and no-one felt the effects, or raged against the dying of the light as much as Sly And The Family Stone. While others paid lip service to such sixties ideals as racial integration, sexual equality and fighting the establishment, the erstwhile Sylvester Stewart put the rhetoric into practice with some of the most radical, perfectly crafted, galvanizing music ever. And when all those ideals had crashed and burned, and Marvin Gaye was making What’s Going On as an article of faith in music, Sly was highlighting his pessimism by cynically pointing out that actually nothing was going on.

At the same time but on a different planet, James Brown started to economise and refine funk still further, the tiniest grunt or ‘Good God’ meaning everything. Without doubt he was the most assertively black personality ever accorded mainstream acceptance in America. The great esteem in which he was held was exemplified on the 4th April 1968, the day Martin Luther King was assassinated. TV stations in cities with large black populations aired a live JB concert in the vain hope it would prevent rioting: it worked.

Sly Stone and James Brown weren’t the only ones going their own way. More and more artists were adopting ‘black’ profiles and breaking free from the corporate chains to experiment as they pleased. There were many records considered radical for the times and even Motown was dragged into the modern world, initially by Norman Whitfield’s groundbreaking work with The Temptations, and then by Marvin Gaye’s What’s Goin On, soul’s first and greatest concept album.

It was a period when new boundaries were being drawn, whether it was Curtis Mayfield creating the template for blaxploitation soundtracks or Isaac Hayes stepping forward as the very essence of blackness or George Clinton’s Parliament / Funkadelic family creating P-Funk from the ruins of Detroit. They were all so different and unique, and they were all cutting the chains of the past to create a new future.