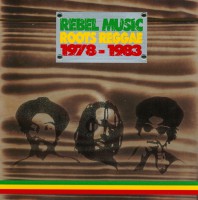 Bob Marley was a man of many faces – a third world visionary and first world pop star, a prophet of national revolution and messenger of global peace, a Rastafarian mystic and lascivious lover. He was never popular amongst punks, who liked their heroes a little more obscure, but we could all appreciate the mans mind-boggling determination and drive to succeed. In 1978, with Marley leading the way, roots influence had not only spread to predominantly white punks but also to young British West Indians their parents having emigrated in the fifties with the promise of work and a better life. Those dreams had soon turned sour as they suffered discrimination at work and school, and were openly targeted by police using the notorious SUS – stop and search – laws. Rastafari offered an oppositional culture, giving a sense of self-respect and identity.

Young blacks in British inner cities did not simply absorb Caribbean music. As an established community they created their own to reflect their life in Britain. Matumbi, Steel Pulse and Aswad rose up but the most militant was poet Linton Kwesi Johnson. He mixed heavy dub with revolutionary politics attacking racism and apathy. It was uniquely British rebel music, street music that knew who the real enemy was in an institutionally racist society.

The Clash’s love of reggae had a massive influence on white British youth. Inevitably as their word spread their adoring legions sought out the originals of their cover versions like Willie Williams Armagedeon Time. Mikey Dread was The Clash’s reggae mentor, lending them an authenticity they could so easily have lacked, but his finest moments came on his own Dread At The Controls and World War III, roots classics both.

Dub had continued to progress, with Lee Perry and King Tubby still innovative forces until Tubby’s protégé Scientist nicked the key to the Kings echo chamber and became the undisputed heavyweight champion of Jamaican dub with ridiculously themed Jah free albums that smashed the seventies mould. Strangely Britain became a new centre for dub production, the Mad Professor being the most admired as post punk bands and even lightweight shite like UB40 popularised the revolutionary medium.

It would be easy to say that the roots movement died with Bob Marley on 11th May 1981, but the truth was a new form had already overtaken it. The idea of reggae going international in the wake of Marley’s phenomenal success had forced it to readdress its reasons for doing what it did in the first place. New technology was changing the way music was made and there was a generation of musicians who naturally wanted to try something different.

And so dancehall was born. Just as roots had blended almost unnoticed with early reggae, so dancehall blended with roots. Barrington Levy was the 16-year-old dancehall sensation in 1980 but it was Sugar Minott, Eek A Mouse and Yellowman who built the foundations from the blueprints drawn by dancehall creator Henry ‘Junjo’ Lawes. If seventies roots was red, green and gold, eighties dancehall was gold chains. What began as ‘slackness’, a Carry On film like slant, rapidly mutated into a nasty, homophobic, criminalised, gun toting load of macho bullshit but as roots retreated back into the shadows that’s another story.

Despite its withdrawal from the mainstream, even in Jamaica, roots had already fulfilled its original purpose, albeit in a subtle way. Bob Marley remains as reggaes only World star but its influence, particularly sonically, is all around in techno, jungle, drum and bass, house and ambient music to name just a few. And think on this. In the late sixties a 12-year-old boy called Clive Graham moved to the Bronx from Jamaica. Emulating the Jamaican sound systems that had dominated his early life, and continuing to listen to roots from afar, he began DJ’ ing block parties. That boy was Kool Herc who alongside Grandmaster Flash and Afrika Bambaataa is acknowledged as one of hip hops founding triumvirate, a genre that has taken over the planet. You can’t get much more influential than that.