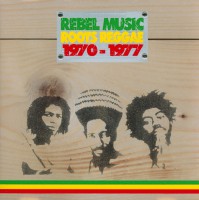 Reggae doesn’t fit. Never has done. From its sixties ska origins to rock steady, roots, dub, dancehall or ragga most Jamaican music has lurked obstinately outside rocks marketing rules. Infact, it’s an enormous tribute to an island with a population half that of London. Even after the success of Bob Marley, when outside interests had retooled reggae to uphold the same values as Anglo American pop, it still didn’t conform.

Reggae has never made itself particularly easy to approach from a casual listener’s point of view. This is probably because the Jamaican music business still functions in more or less the same way as it did in the fifties with minimal acknowledgement of the changing industry overseas. The islands record labels grew out of sound systems – enormous open air disco set ups – which were the only way young Jamaicans, could experience the more extreme ends of contemporary black music. The sound systems soon became community focal points, the biggest operators assuming Godfather like status. To keep their systems on top they needed a constant supply of ‘killer cuts’, tunes that nobody else owned. Not surprisingly, the first record producers were these big shots whose sole purpose was to manufacture records to play. To this day, a hierarchy persists where producers carry far more weight than the artists they employ. As a result Jamaican music has evolved as a strictly singles orientated affair, where albums are often collections of 45’s or hastily recorded filler rather than cohesive works, and only a handful have ever pretended to be anything else.

Reggaes transition to roots was like the blending of brown into black paint. The gradual change went practically unnoticed, certainly until 1973 when The Wailers Catch A Fire opened the commercial door. Roots was the reaction of a younger generation for whom Jamaican independence wasn’t working until Michael Manley’s left wing Peoples National Party forced a socio political upheaval , blowing away the final vestiges of colonialism. Crucially, the new government dragged Rastafarianism out of the shadows into the forefront of Jamaican youth culture. As it swept the island, The Wailers, Toots And The Maytals and Lee Perry and his Upsetters shaped the new musical genre. Roots put a downbeat on Africa, black deliverance and redemption, calling on the youth to put their consciousness into action and be warriors, musicians or not. It was Rebel Music from the start.

U Roy’s Version Galore certainly wasn’t the first roots record but it did pioneer the deejay toasting revolution together with Dennis Alcapone’s Gun’s Don’t Argue. They were amongst a batch of rebel rousing early records like Nineys Blood And Fire but what really broke reggae beyond the confines of Jamaica was the soundtrack to The Harder They Come starring Jimmy Cliff. One of the first albums to be conceived as a whole, and one that became something of a yardstick for roots style was Screaming Target. With a raw, instinctive energy, the not quite 20 year old Big Youth yanked the whole idea of toasting on from the U Roys and Alcapones by addressing issues beyond the dancehall. And just as he was the new sound on the streets Big Youth was also the look, the first to flash dreadlocks which had been noticeably absent in The Harder They Come.

Dub as an end in itself, rather than as DJ accompaniment had been slowly evolving but it was during the roots era that new studio technology allowed the creation of something genuinely dread. One of the first dub albums issued was The Upsetters Blackboard Jungle Dub, a startling creation of Lee Perry’s rhythms cut with King Tubbys hands on the controls. Despite Perry and Tubby’s own records there was no better example of the high art of dub and the craft of the remixer than Augusto Pablo’s King Tubby meets Rockers Uptown released in 1977 but recorded between 1972 and 1975.

As the mainstream, i.e. white audiences, embraced dub and DJ styles as the most potent expressions of roots culture, most singers other than Bob Marley, were usually overlooked. But roots singing was another vibrant strand, three part harmonies an integral slice of Jamaican culture over the decades. Apart from Marley, individuals like Johnny Clarke, Burning Spear, Horace Andy and ex Wailers Bunny Wailer and Peter Tosh showed how roots singing encompassed a mystical, spiritual element amongst the revolutionary patter.

Of course, the rise of roots coincided with the rise of punk, Roxy club DJ Don Lett’s largely responsible for the punky reggae party, spinning roots at the quintessential punk venue due to the lack of early punk records. Some of the most essential purchases for snorting socialites and disenchanted punks alike were Dillinger’s ‘Cocaine In My Brain’, Max Romeos War Inna Babylon, Mighty Diamonds, The Abyssinians, The Congo’s, Tappa Zukie and Third World. But, the absolute must haves were Junior Murvin’s Police And Thieves and Cultures prophesy toting Two Sevens Clash, another anthemic album built on a genius title track. And yet this was just the tip of a massive cultural surge. In 1977 Roots Reggae was threatening to break out of the confines of Jamaica for good. It had been a long, long journey from the ska sixties and even then there was a way to go.