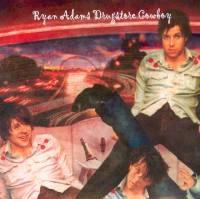 Self-deprecating, self-mythologizing and self-destructive, Ryan Adams has always gone all out to fuck up his life and career. Once a precocious wunderkid I think it’s safe to say that he threw away most of his early magical momentum to pursue his ever changing artistic dream and a shitload of Class A drugs. It’s a shame because while he could be funny, bitter and sad all at the same time, he’s the only man I know who could do it all in one song and with that incredible voice too.

Following the magnificent Heartbreaker and Gold LP’s, he kind of lost the plot by releasing six albums over the following four years. Seemingly incapable of concentrating on any one idea his numerous projects included a punk group with Jesse Malin, a black metal sci-fi album, a homage to The Replacements and hundreds of ‘regular’ songs in varying stages of completion.

The music industry just wasn’t built for someone as prolific and wayward as Ryan Adams. His wilful, erratic substance fuelled ways may have enhanced his cult status but they wrecked any chance of the stardom he had once held in the palm of his hand. Even as a rabid fan I always found his constant dodging about a bit tiresome. Too much too often, he was way too prolific for his own good. In fact, it was only when he joined up with The Cardinals that he began to slow down. What his future holds God only knows, but one thing is most definitely certain, Ryan Adams will never be predictable.